Originally airing on NBC in the 90s, SeaQuest DSV is a show aboard a submarine, set in the year 2018 (25 years in future at the time). The SeaQuest is a state of the art underwater vessel with a combination of military and scientific influences. Most of the main cast is military, with a few civilian academics. Additionally the cast includes a dolphin, which can be communicated with by use of a Vocorder. 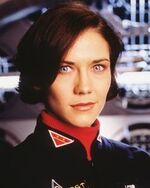 Lieutenant Commander Katherine Hitchcock was the Chief Engineer of the seaQuest DSV 4600 in season 1. She came aboard during her refit in 2017 and in active service afterward. She was played by actress Stacy Haiduk. (Full article)

Community content is available under CC-BY-SA unless otherwise noted.
Advertisement